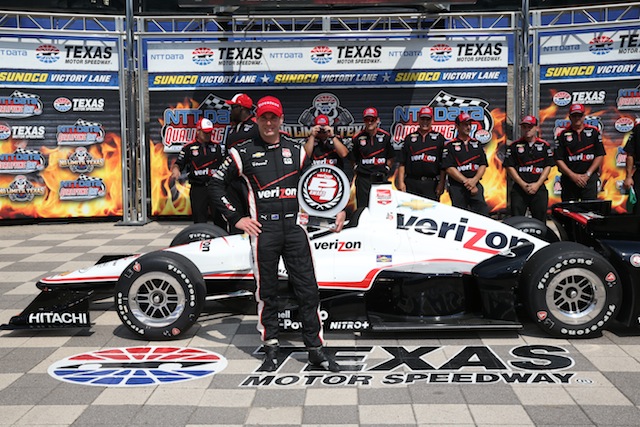 Will Power has claimed his third straight pole position at Texas

Will Power has led Team Penske to another stunning display of raw pace by qualifying fastest for the Firestone 600 IndyCar race at Texas Motor Speedway.

Power was the first of the 23 cars to set a time in the two-lap average qualifying format and was pleasantly surprised to see his effort prevail after a nervous wait.

It was the third consecutive year Power has led the way in Texas qualifying which sees him now with tied for fifth with Penske consultant Rick Mears on the all-time IndyCar qualifying list with 40 poles.

Andretti driver Carlos Munoz upset what was shaping as a Team Penske sweep out of the front two rows when he nabbed fourth fastest.

Power was relieved to have held onto the top spot, fearing he was a sitting duck after being sent out first.

“But the track didn’t change much (and) I’m really happy and see what we can do tomorrow night.”

Dixon was the second last driver to fire onto the track for the single car runs but an opening lap run of 217.71mph (350.37km/h) would put him out of the equation for a more prominent starting berth.

“For the most part it’s about having a consistent car for a stint. You slow down about 15mph (24.1km/h) in a stint here.

“Our car seems pretty good on long runs here so we will see what the race brings.”

See below for qualifying results