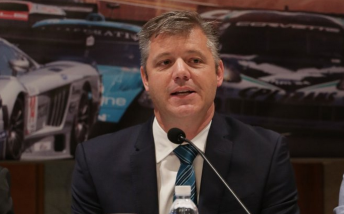 Just two days after confirming a deal to race in Malaysia from next year, V8 Supercars has signed a memorandum of understanding for a second Asian event from 2017.

Category CEO James Warburton has announced the preliminary agreement via the V8 Supercars website this morning.

No details have yet been offered, with the facility in question yet to be built and not fully guaranteed to go ahead.

Warburton would confirm only that, while talks have taken place in the country, the proposed second event isn’t in Thailand.

“For absolute clarity there is an enormous amount of work that has to be completed on the other side of the ledger, which is essentially building the facility and the like.

“A lot of that has already started so that’s another exciting one, but we have to be cautious about how we build things.”

Proposed new circuits in Asia include a recently announced project in Jakarta, Indonesia, which a government official has declared will be ready to run international events from 2017.

Warburton meanwhile downplayed the need to ‘twin’ the KL City Grand Prix with a second event in order to make the freight costs sustainable for the promoter.

The category’s recent five-year deal with the Circuit of the Americas in Austin, Texas, lasted just one event, which saw the promoter lumbered with an estimated $2.5 million freight bill.

The deal was cancelled when V8 Supercars failed to find a second American event with which the COTA could share freight costs.

“From a freight and logistics point of view it makes it (Asia) more sustainable,” he said of a twin.

“(But) freight to Asia is very efficient … and we have worked pretty hard to make our freight model pretty robust from where it has been,” he said. “So there is no need for a twin.”

Warburton also confirmed that Malaysia’s KL City GP will be an additional event on the 2016 calendar, rather than replacing a local venue.