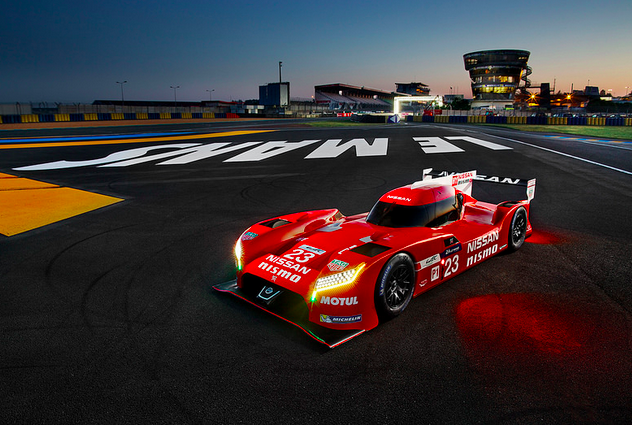 Nissan’s factory drivers have expressed their excitement about the future of one of the most unorthodox LMP1 assaults on the prestigious Le Mans 24 Hour Classic.

As Nissan arrives for the first time this season belatedly with a trio of GT-R LM NISMO machines, its drivers are praising the pulling power of the slippery but radically designed LMP1 cars.

Considered one of the biggest gambles in Le Mans history, Nissan has bucked convention to build front-engine, front-wheel-drive prototypes with the entire hybrid drivetrain sitting ahead of the driver.

In straightline speeds during the recent official Le Mans test, the GT-LM cars were logged as the fastest at 336km/h however the overall lap pace around the 13.6km circuit lagged well behind its LMP1 rivals.

With Nissan compromised on the final make-up of his hybrid system, now running in the 2 mega joule class instead of its more desirable 8MJ, the squad has yet to put out official power and torque figures.

Former F1 racer Max Chilton maintains the incredibly torquey twin turbo V6 hybrid forces the driver into thinking more about what they are doing behind the wheel.

“I think people are giving us credit for trying it and I think with time we can show that people maybe haven’t always been doing Le Mans in the right way,” said Chilton, who will share the #23 with Olivier Pla and GT Academy graduate Jann Mardenborough.

“The torque is outstanding. More than any other racing car I’ve driven.

“I don’t think you have to drive it as differently from rear-wheel drive as I expected, but you have to think about your driving in more detail.”

Michael Krumm, sharing the #22 with Harry Tincknell and Alex Buncombe, has retracted his initial scepticism over the design after playing a leading role in developing the trend-bucking machine.

“To help develop a new car and be part of the race squad is a big honour for me,” said Krumm who was competing for Nissan at Le Mans when the Japanese maker last competed outright in the late 1990s.

“That said, I thought the team was mad until I saw the simulations and had it all explained to me by Ben (Bowlby, team technical director) and Ricardo (Divila, Nismo engineer).

“From that moment I was extremely excited about the concept.

“The most impressive thing to me was how good the traction was in a straight line and aerodynamics – the car is very low drag so it just goes and goes and goes.

“I love the engine. It is a really nice turbo engine with amazing torque.

“We’re going to be quicker and slower than other cars at different parts of the circuit so it’s going to be interesting.

“I think the FWD will show some serious advantages if it is wet at Le Mans.”

The #21 Nissan, which is only listed to make an appearance at Le Mans next weekend and no other WEC races, will be crewed by Tsugio Matsuda, Mark Shulzhitskiy and Lucas Ordonez.

Qualifying for Le Mans spans across Wednesday and Thursday next week.