James Warburton confirming the heads of agreement in KL on Wednesday

V8 Supercars officials hope that a successful partnership with the promoters of the Kuala Lumpur City Grand Prix will help pave the way for more Asian events in future.

It was announced on Wednesday that V8 Supercars has signed a heads of agreement with Malaysian firm GT Global Race SDN BHD to host the series in Kuala Lumpur for four years from 2016.

This August’s inaugural Kaula Lumpur City GP event, which will feature a range of local categories as well as a demo of five V8 Supercars, is being described as a ‘test bed’ for the race.

A final contract between V8 Supercars and GT Global is therefore not slated to be signed until later this year, most likely to be announced with the remainder of the championship’s calendar in September.

GT Global is headed by Yang Amat Mulia Tunku Naquiyuddin ibni Tuanku Ja’afar, who is the eldest son of the 10th King of Malaysia, and local entrepreneur M Arrasu.

The company says it plans to establish a series of high profile street races across the Asia Pacific region in coming years.

V8 Supercars has also made no secret of its desire to hold multiple races in Asia, with the region providing favourable logistics and television time slots back into Australia. Australian Simon Gardini at the launch

Freight costs played a significant role in crippling V8 Supercars’ last international sojourn to the United States in 2013, which saw races take place in the early hours of the morning in Australia.

Category CEO James Warburton has several meetings with other potential promoters and government officials in Asia this week as the championship attempts to strengthen its ties in the area.

Warburton stressed before flying out of Australia that he had “two very strong possibilities for next year”, leaving open the possibility that there could be two Asian events as soon as 2016.

“James is in Asia for the rest of the week and has other discussions planned,” a V8 Supercars spokesman told Speedcafe.com.

“At this point we have announced Kuala Lumpur for this year and that is the extent of the events that we have confirmed at the moment.

“(But) if the right offer came at the right time then obviously we’ll look at it (adding further events).

“We’re now in the Asian market and we’re expecting Kuala Lumpur to be a massive event.

“They want it to ultimately rival the Macaus and the Monacos of the world. It’s got City Hall backing, so it’s got backing from the top down.” 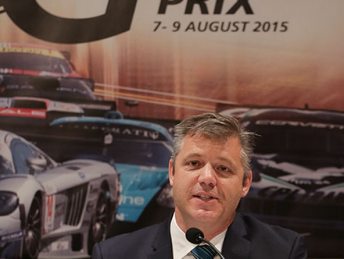 Warburton will hold further talks in Asia this week

GT Global has partnered with UK-based Apex Circuit Design to create the 3.2km city layout, while global engineering and construction firm KBR has been charged with bringing it to life.

The project is being managed by KBR’s Melbourne-based motorsport specialist Simon Gardini, who is also a member of CAMS’ National Track Safety Committee.

The expertise of the nearby Sepang International Circuit, which had held its own talks with V8 Supercars over a possible event, is also being called upon for the start-up street circuit.

The Audi series includes local hero Alex Yoong, who is the only Malaysian to have raced V8 Supercars.

News of the KL agreement was meanwhile met with widespread support from the V8 Supercars community on Wednesday, with those set to take part in this year’s demonstration particularly enthusiastic.

“I’m really pumped to race in Kuala Lumpur, I’ve raced there before (at Sepang in A1GP) and it’s an awesome place to visit,’’ said Will Davison, who will join Craig Lowndes, Scott McLaughlin, Chaz Mostert and Todd Kelly on track.

“It’s a real boost to have an international race back on the V8 Supercars calendar so well done to all involved in this new agreement. It’s going to be exciting to head over in August to rumble on the streets of KL.’’