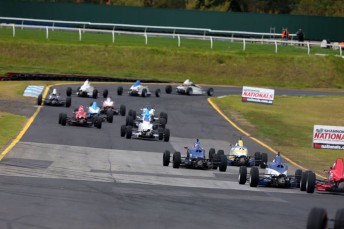 The Formula Ford field at Sandown

The Formula Ford Association has moved to underline its plan to continue operating a national series beyond the end of 2015.

The long-running category’s current status as a CAMS national series is under increasing question as the governing body prepares to introduce its own Australian Formula 4 Championship.

FFA chairman John van Leeuwen admitted to Speedcafe.com this week that the FFA may have to look at options beyond CAMS if necessary in order to continue at a national level.

The category has been rejuvenated over the last two years under the management of the FFA, hosting consistently strong fields while running with the Shannons Nationals.

In response to comments made by CAMS CEO Eugene Arocca, the FFA has issued a statement stressing its desire to continue its growth on the Shannons bill.

“Our long term objective is for National level Formula Ford to continue for another 30+ years in Australia.

“We have put in place numerous prizes and structures for 2016 to ensure that our healthy car counts in 2015 will continue on a high profile calendar.

“In 2016 we will be visiting some of Australia’s best circuits with the intent of continuing our free-to-air television package and continue our strong relationship with the ever-growing Shannons Nationals series.

“We would also like to remind various people within the Australian motor racing landscape that we have produced more professionally paid Australian racing drivers than any other development category in the country.

“Whilst we are intrigued to hear what the AMRC (Australian Motor Racing Commission) will put forward with their review, we will not change our plans to continue with a National series next year, or change our five year strategy as a high quality, affordable development category through to at least 2020.

“We would like to thank all of our current and former members, drivers, teams and fans for their support during what has been an interesting period of Australian Motorsport History.”

Amid CAMS’ push to introduce Formula 4 as a stepping stone to European competition, two V8 Supercars rising stars, Nick Percat and Scott Pye, have both shown public support for Formula Ford this week.

“Why cut the junior category that is healthy in numbers & producing close racing?” 2009 Formula Ford champion Percat Tweeted on Wednesday. “@FFordAus breeds champions & teaches so much…”

“I think to stay in Australia, Formula Ford is still a fantastic category for that,” he said on the V8TV produced Inside Supercars.

“Low grip, loads of car control, it is where you learn your skills really.

“I’m not too sure yet about Formula 4. I do think it’s got a place and for me it would have been handy to have that after Formula Ford to then go to England and step into British Formula 3 with something in between.

“To step from Formula Ford into Formula 3 was a really tough thing to do in Europe.

“But for Australia… for the moment I’m still a big fan of Formula Ford.”

The F4 Championship will run all of its rounds with the V8 Supercars, starting at Townsville in July.

The new category is having its third pre-season test at Sydney Motorsport Park today, which will see V8 Supercars commentator Russell Ingall sampling one of the cars.