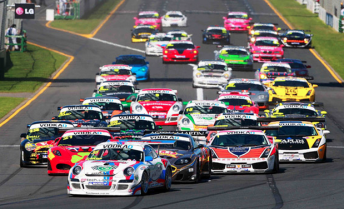 The AGTC field pictured at Albert Park in 2009

The Australian GT Championship has revealed intentions to join the support bill for next year’s Formula 1 Australian Grand Prix.

The rapidly growing championship is keen to return to the Albert Park circuit for the first time since 2010, with discussions already underway with the Australian Grand Prix Corporation.

Championship owner Tony Quinn confirmed the proposal is shaped around hosting 4 x 30 minute races at the event, which moves to a March 31- April 3 date in 2016.

Initial feedback has been positive, however, any move to join the AGP support bill will require the backing from both the AGPC and Formula One Management (FOM).

Australian GT is not the only category looking to join the Albert Park support bill, with the Australian Formula 4 Championship also eyeing a berth alongside regular support acts V8 Supercars and the Carrera Cup Australia.

“We have certainly put a word into the guys to say the we think that the Australian Grand Prix is the best fit for the Australian GT series from a demographic and sponsorship point of view,” Quinn told Speedcafe.com.

“There is a lot of interest surrounding the Australian Grand Prix.

“The initial response from those guys has been very positive so we will just wait and see.

“The guys in the series see it as a good thing too.

“A race at the Grand Prix would be cool in as much as sponsors and corporates and everything that goes along with that.

“First things first we just need to see if we pass the litmus test or whatever test they put us through but we haven’t been to the GP for a five years.

“We haven’t missed it and we can live without it but I think it would be good for motorsport in Australia for the GTs to be there.”

Work continues behind the scenes on the formulation of a new endurance series, although Quinn admits the championship calendar will only be finalised once the 2016 V8 Supercars schedule is known.

The AGTC is understood to be contemplating a schedule which consists of five sprint rounds and up to four endurance meetings, including visits to New Zealand venues Hampton Downs and Highlands Park.

“I think the thing we are interested in is the V8 calendar for next year and what it is going to look like because that will determine what we do overseas in New Zealand and what races we will do in Australia,” added Quinn.

“We are waiting on that before we make too many plans.

“We don’t want to clash with the V8s we want to work with them. We will very quickly be in a position regarding what we are going to do with the endurance format.

“We don’t want to wait until the last minute but we are pretty flexible and more flexible than most.”