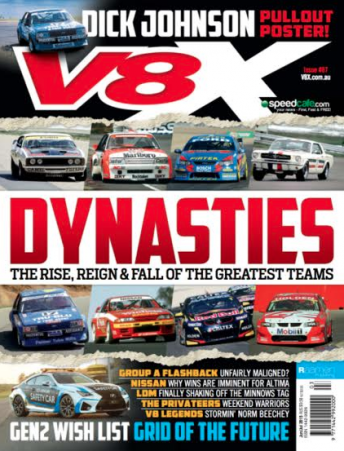 Issue #87 of V8X Supercar Magazine is now on sale

The print and digital editions of V8X Supercar Magazine issue #87 (June/July 2015) are on sale in stores.

V8X Supercar Magazine issue #87 features the greatest teams in Australian touring cars on the cover, in a detailed look at the rise, reign and fall of the dynasties.

The Dynasties – The rise, reign and fall of the greatest teams in Australian touring cars.

Driving a V8 Supercar – How drivers can adapt and extract speed from the unique V8 Supercars.

Gen2 Wish List – The manufacturers and cars we would like to see on the Gen2 Supercar grid.

Group A Revisited – Thirty years on from its debut, we take a detailed look back at the Group A era.

Sky’s the Limit – How engine upgrades could be the missing ingredient for Nissan Motorsport.

Shaking off Minnow Tag – How Lucas Dumbrell Motorsport is climbing off the back of the grid.

Rise & Fall of the Privateers – A look back to a time when ‘weekend warriors’ were commonplace on the grid.

Legends: Beechey – Reflecting back on the career of Stormin’ Norm Beechey.

ANALYSIS
A closer look at what’s happening in the V8 Supercars paddock.

PADDOCK TALK
Looking at how to fix the V8 Supercars calendar.

FINAL LAP
Uncover the driver behind the helmet as we get to know David Wall.