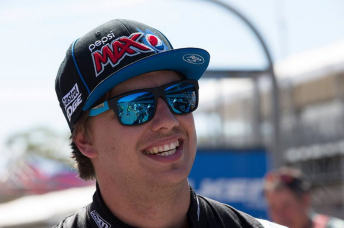 Chaz Mostert has dismissed talk that he could make a surprise team switch next season, affirming that he will honour Prodrive’s option on his services.

The team announced last month that it has taken up its two-year option, which was included in the contract Mostert had signed with the squad at the end of 2013.

Despite the existence of the option, Mostert’s management is understood to have spoken with other teams about 2016, triggering speculation that the driver could find a way out of the contract.

Speedcafe.com however understands that the reigning Bathurst winner is now committed to staying on with the Ford team; a position reaffirmed by Mostert on this week’s Inside Supercars.

“Prodrive has taken a two-year option on me so as far as I know I’m racing for Prodrive for the next two years after this year which is really exciting,” he said.

“I’ve got a great team behind me, the two years I’ve been with the now have been awesome.

“It’s really exciting to have the same line-up and the same team-mate for another two years.

“I’m really looking forward to racing this year, but thinking about the future it’s important to have one of the main seats.”

When pressed further, Mostert admitted that some details of the new deal do remain unresolved, but expects them to be formalities.

“There are little things to do, we have to talk about some stuff, but as far as I know I’m racing for Prodrive,” he added. “It’s done and dusted.”

Although newspaper reports have claimed Mostert will earn $500,000 per season over the next two years, Speedcafe.com understands the deal is worth little more than half that figure.

Mostert has quickly risen to be one of the category’s most highly rated drivers since debuting in mid-2013, winning races for both Dick Johnson Racing and Prodrive.