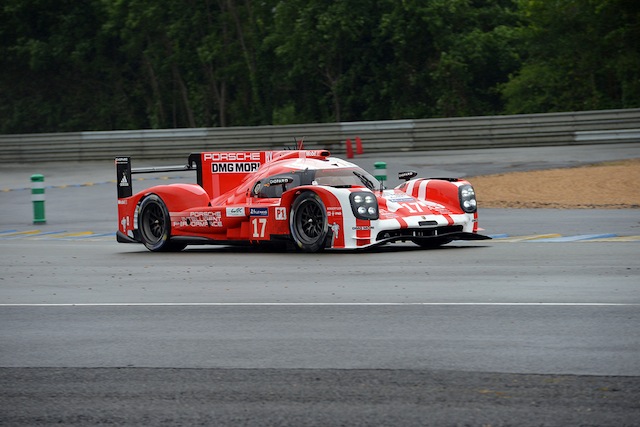 Kiwi Brendon Hartley led Porsche to the top of the times as rain marred the twin four-hour test sessions for the Le Mans 24 Hour.

Hartley set the best time in the final session in 3:21.06s, almost a full second ahead of the #18 Porsche 919 Hybrid of Neel Jani who topped the opening session.

Audi was .4s off Hartley’s pace through Marco Bonanomi in the #9 R18 e-tron quattro as the four-ringed marque prepares to edge closer to Porsche’s record of 16 outright wins in the classic from June 14-15.

The best of the Toyota TS040 Hybrids was returning driver Kazuki Nakajima, who was cleared earlier in the weekend by the FIA medical team, in the #1 machine which was seventh.

Nissan had a difficult baptism with its GT-R LM NISMOS with the best proving Olivier Pla who clocked a 3:43.38s in the opening stint which saw it well behind the leading LMP2 machines.

Karun Chandhok took the best LMP2 time in the Murphy Prototypes Nissan in 3:42.40s in 11th overall which was .5s slower than the leading time in the class during the first session set by Laurens Vanthoor.

There were problems for all three Nissans as the bold front-drive, front-engine machines made their first showing against other cars after previously only undergoing private tests in the last few months at Kentucky in the US.

Lucas Ordonez was reported to the stewards for not being able to select reverse gear in the #21 Nissan GT-R LM NISMO.

With 90mins to go in Test 1, Jann Mardenborough stopped at Tertre Rouge in the #23 Nissan with an electrical problem.

A red flag came out for Michael Krumm in the #22 Nissan who came to a stop on the circuit before he was able to get going again.

“We weren’t chasing headlines today. It was all about learning and recording data as part of our preparation for our Le Mans debut,” Team Principal and Technical Director, Ben Bowlby said.

“At the end of the day our times in the damp conditions were competitive and during the morning runs we recorded the two fastest straight line speeds overall.

“We know we have a big learning curve ahead of us bringing this unique front-engined, front-wheel-drive car to Le Mans but after our first day here we have three straight cars in the garage and mountains of data for our engineers to study.”