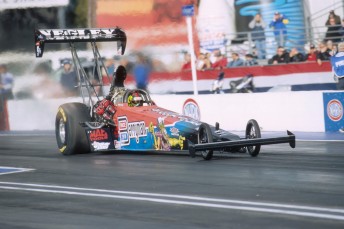 McClenathan boasts more than 20 years competing in Top Fuel racing, where he has racked up 34 NHRA event victories, including two US Nationals triumphs in 1996 and 1999.

“I love coming over and racing in Australia – the fans are great, and while the tracks are all news to me I have been getting to know them fairly well over the past few years, and the competition is always tough,” said McClenathan, who last appeared at the Winternationals in 2011.

“I have only run at the Winternationals once and it was rained out so that was a bummer, because it can be a very fast track being at sea level.

“I am really excited to race for Santo and the boys again and look forward to working with Lee Beard, as well as seeing a lot of people that I have met in the past.”

The Fuchs Winternationals begin on Thursday before climaxing with the finals on Sunday.