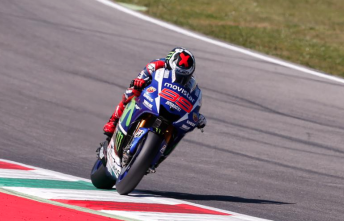 Jorge Lorenzo continued his winning streak with a commanding ride to victory in the Italian Grand Prix which saw Marc Marquez’s title defence suffer another setback.

The factory Yamaha rider assumed the lead in the early stages at Mugello which he refused to relinquish as he secured his third consecutive win.

Once in the lead, Lorenzo calmly stretched his lead over the chasing pack while a titanic scrap for the remaining podium positions developed.

Ducati’s Andrea Dovizioso held second spot while Marquez surged up to third having started from a lowly 13th on the grid.

Polesitter Andrea Iannone moved into second once team-mate Dovizioso began to fade with Marquez snapping at his heels as the race ticked towards the final third.

Dovizioso was eventually forced into a premature retirement.

The podium fight took a dramatic twist with six laps remaining when Marquez crashed out of the race.

This gave Iannone the advantage but he was unable to relax due to a hard charging Rossi, buoyed by a huge home crowd.

In the end, Iannone held on to finish second with Rossi third and Honda’s Dani Pedrosa fourth, which is his best result since his return to the premier class following his injury layoff.

Cal Crutchlow crashed heavily, while occupying fifth, in the closing laps in what proved to be a disappointing day for the LCR Honda squad, which was compounded by a retirement from Australia’s Jack Miller.

Suzuki’s Aleix Espargaro also suffered a crash early on but luckily he escaped without causing further damage to his injured thumb.