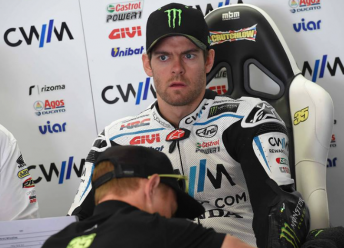 Cal Crutchlow has sustained a dislocated ankle as a result of his high speed crash during the Italian Grand Prix.

The LCR Honda rider had been challenging for a strong points finish in fifth position before crashing out of the race at Mugello with three laps remaining.

The Brit is hopeful he will return to action at the Grand Prix of Catalunya at Barcelona on June 14.

“It’s very disappointing for the whole CWM LCR Honda team. We had what I thought was a good weekend up until the race,” said Crutchlow.

“This morning I had a very heavy crash in the warm-up and had a big impact on my hand, so I thought it was a good showing to be racing in the position that I was.

“We had the 38 (hard) front tyre which meant steering the bike was not easy, but overall we were not so far off the factory guys and with the right setting I think we could have been higher.

“Unfortunately the front tyre failed me in the end and just tucked under at a very fast corner. My foot got caught in the back of the bike and dislocated my ankle so I’m in a lot of pain and we’ll have to monitor the situation but I’ve had good treatment.

“Obviously I’m really disappointed because it was a good race and a good showing and Honda are working very hard for us to improve so we need to come back stronger in Barcelona hopefully.”

Sunday’s retirement has seen Crutchlow drop to seventh in the championship standings.