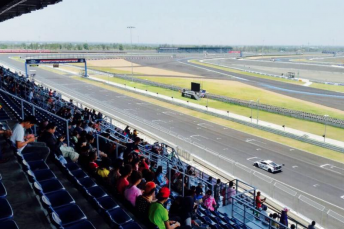 V8 Supercars CEO James Warburton will jet to Asia this week as the category hunts a new international event for its 2016 calendar.

The championship has focussed its international ambitions on the Asian region since its five-year deal with the Circuit of the Americas was terminated last year.

Thailand’s Chang and Malaysia’s Sepang circuits have both been touted as possibilities for V8 Supercars, which has not held an event outside Australasia since the one-off visit to Texas in 2013.

“Asia is the focus and it’s still a possibility for next year,” Warburton told Speedcafe.com at the recent Castrol Gold Coast 600 launch.

“The calendar announcement (in September) will be the time I talk about it, but we’ve still got a couple of irons in the fire.”

V8 Supercars promotes 10 of the current 14 championship events itself but, according to Warburton, is not prepared to take the financial risk on an Asian event.

“A lot of it is about promoting it yourself,” he confirmed.

“We can go to a lot of these new fantastic facilities and promote it ourselves, but at this particular moment in time we are not interested in doing it.

“That appetite may change once we get through Gen2, but and we’ve still got a couple of possibilities in Asia for 2016 (with other promoters).”

As previously reported, the category worked hard on its freight logistics last year in order to ensure that the championship can be transported in just one aircraft.