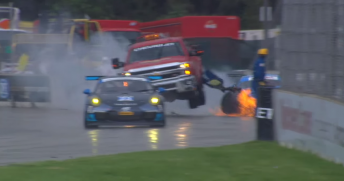 Australian James Davison has been involved in a sickening crash after the checkered flag in the United Sportscar Series race on a wet track at Detroit’s Belle Isle street circuit.

Davison’s Aston Martin V12 Vantage GT3, runner-up in the GTD class, slammed into the back of the Safety Truck after the finish of the race.

The 28-year-old reported soreness after the accident but was able to take part in the podium ceremony.

The #58 of Jay Heylen was stopped on course at Turn 1 when the Safety Car was deployed to remove it.

Heylen was taken to the medical centre as a precaution following the incident but later released.

Two track officials were also injured in the melee with one released from the medical centre and another taken to hospital where he will remain under observation overnight.

See below for video of the incident