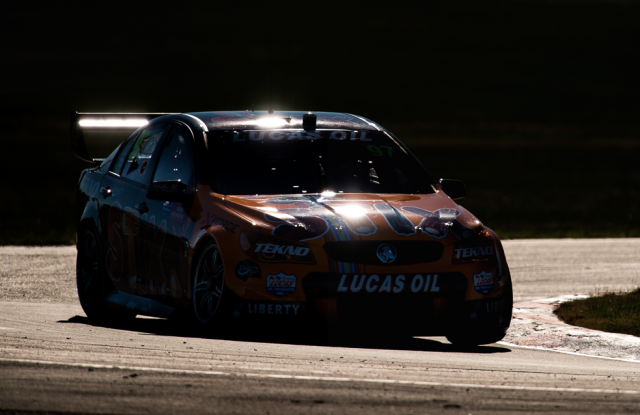 Shane van Gisbergen fell to seventh in the standings at Winton

A belated post-event debrief has cleared the air at Tekno Autosports after a disastrous Winton that left the team ‘all pretty angry’.

Shane van Gisbergen fell to seventh in the championship with a 23rd place finish in the 200km Sunday race.

The Kiwi’s quest for a top 10 result had fallen apart when the #97 Holden took fuel but no tyres at the mid-race Safety Car.

With the vast majority of the field having taken on their soft tyres, Van Gisbergen was called back to pitlane just two laps later to correct the decision.

The angry driver spent the rest of the race at the back of the field not responding to radio messages from engineer Geoff Slater.

Van Gisbergen flew to England for McLaren GT duties the day after the event, leaving the team unable to complete a full debrief until late this week.

“I was pissed, it was a school boy error what we did there,” Van Gisbergen told Speedcafe.com.

“When you’re the only car that does one thing and everyone does the other you’re not going to be right.

“The hard part was that I couldn’t go through it with Steve (Hallam, team manager) and Geoff (until this week).

“It’s all good now, but we were all pretty angry afterwards. We just threw it away.”

The Winton misjudgement had striking similarities with that which hit Mercedes and Lewis Hamilton in the following weekend’s Monaco Grand Prix.

While Mercedes copped most of the public blame in the aftermath of Hamilton’s Monaco loss, the Brit had told his team via radio that he wanted new tyres under the late Safety Car.

Van Gisbergen admits he told Slater that he felt it was too early to switch to the softs when the Safety Car was called at Winton but, like Hamilton, feels he should have been overruled in the circumstances.

“I said it was too early to go to softs because it was such a long stint (to go),” he recounted.

“But when you’re on hards that have already done half a stint and you’d raced all the day before on the other (hard) tyres, you’re going to be better off just (moving to the softs and) saving tyres.

“It took an extra lap to make that decision but everyone had already pitted and we were mid-pack on the wrong tyres anyway. Our race was ruined.

“You need to be able to make that decision in the half a lap that we had.

“It’s all part of learning. We all know the mistakes, we just have to not do it again.”

Van Gisbergen’s season at Tekno is taking place in the shadow of March’s announcement that he will switch to Red Bull Racing Australia next season.