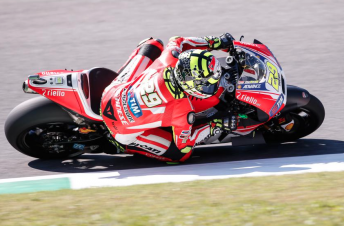 Andrea Iannone on his way to pole position at Mugello

The Italian, riding with a hairline fracture to his shoulder, claimed his maiden premier class pole position with the fastest ever MotoGP lap around Mugello.

Iannone’s 1:46.489s was 0.095s quicker than Yamaha’s Jorge Lorenzo, who had topped the majority of the session, having set record pace in free practice.

It proved to be Ducati’s first pole position at its home circuit since Casey Stoner’s triumph in 2007.

Andrea Dovizioso completed a strong day for Ducati with the Italian securing the final place on the front row of the grid in third.

While Ducati starred, Marquez endured a difficult day which began with the Spaniard missing the cut in practice to claim a place in Q2.

Worse was to follow with the Honda man eclipsed by Yonny Hernandez and Aleix Espargaro in Q1, leaving him to start from a lowly 13th on the grid.

Cal Crutchlow emerged in fourth position with another impressive performance on the satellite LCR Honda ahead of Suzuki’s Aleix Espargaro, who showed no signs of the thumb injury he is carrying.

The third Ducati of Michele Piro was sixth 0.005s in front of Honda’s Dani Pedrosa.

Local hero Valentino Rossi was unable to match the pace of the front runners which left the nine-time world champion in eighth.