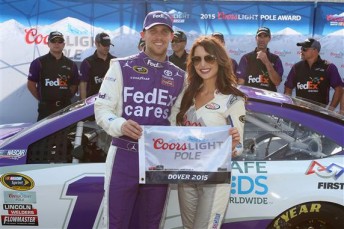 Hamlin scored his first pole of the season

Denny Hamlin has done the right thing by his primary sponsor by taking pole at the FedEx 400 benefiting Autism Speaks in Dover.

It was Hamlin’s first pole of 2015, third at Dover 21st of his Sprint Cup career.

“It’s great – obviously our car’s shown speed all day long, which is something that we haven’t had lately, so we’re kind of building and getting a little bit better and starting to figure out our setups and whatnot,” said Hamlin.

“So we’re getting better and obviously this kind of shows it.”

Dispute sitting second in the points standings, Martin Truex Jr. is still to lock himself in the Chase for the Sprint Cup. However, his chances have received a boost with a front row starting spot alongside Hamlin. Kyle Larson, Matt Kenseth and Joey Logano completed the top five. Defending series’ champion and points leader Kevin Harvick will start sixth.

Some big names were left out of later qualifying rounds at the two elimination stages in the three-round format. Six-time Cup champion and nine-time Dover winner, Jimmie Johnson, will come from 14th on the grid.

Jeff Green and Travis Kvapil failed to qualify for the 43-car field.