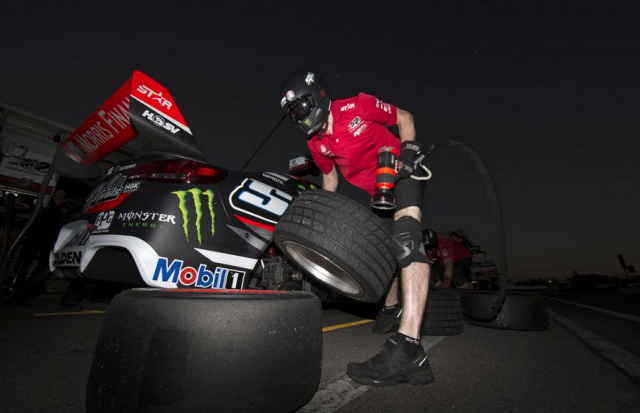 V8 Supercars has moved to stop a repeat of the Holden Racing Team’s decision to run wet tyres on James Courtney’s Holden during the dry second race at Winton.

The Hidden Valley supplementary regulations state that wet tyres may only be used if the race director has declared the circuit wet.

Already off the lead lap following an early accident, Courtney was switched onto wets at Winton in order to save his allocation of slicks for later in the weekend.

Although the move was well within the regulations, V8 Supercars took a dim view of the strategy.

“While the instance of car #22 using wet tyres on a sunny day at Winton was within the rules, it was not the intent of the rules,” said V8 Supercars competition director Damien White.

“It was an example of working within the boundaries of the rules but perhaps not the intent. This clarification closes that loophole.”

The Super Sprint tyre allocation has been tweaked for Darwin with a set of soft tyres to be used in Saturday’s second qualifying session and race.

Pitstops have now been prohibited in Saturday’s races in order to ensure teams running in poor positions do not elect to switch to older tyres.

Exemptions will be allowed if the track is declared wet or a tyre has been damaged.

“It was one thing to prevent the unnecessary use of wet tyres, however we still needed to create an allowance to change a tyre,” added White.

“Importantly, the way we structured this amendment, it is only permitted to change a damaged tyre.

“You can’t just change because you’ve had a problem in the Saturday race and want to save tyres for Sunday. Again, that’s not the intent.

“So, they can change tyres, but they can’t use the replaced tyre or tyres on Sunday.”