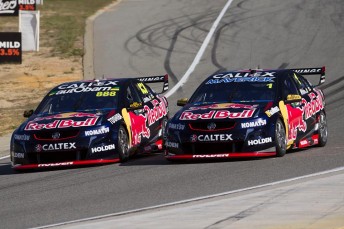 Triple Eight has now secured a third REC for its expansion

Triple Eight has won the tender for the 26th V8 Supercars Racing Entitlements Contract, shoring up its expansion to three cars for 2016.

V8 Supercars has confirmed that its Board has approved the sale of the ex-James Rosenberg Racing license to the Roland Dane-owned Triple Eight.

The team announced in March that it would expand to three cars for next year, signing Shane van Gisbergen to join existing drivers Jamie Whincup and Craig Lowndes.

V8 Supercars CEO James Warburton said there had been multiple bids for the license.

“The bid process was extremely competitive amongst the bidders,” he said.

“It is testament to the great health and growth of the sport at all levels that a number of parties wanted the opportunity to join the championship from next year.”

As previously reported, the grid has been frozen at 26 cars for next year, with the ex-Tony D’Alberto Racing and Triple F Racing RECs remaining “on the shelf” after they failed to be sold during 2014.