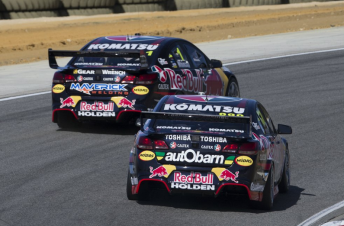 Craig Lowndes has labelled Triple Eight’s expansion to three cars next season as its greatest challenge since switching from Ford to Holden in 2010.

The 40-year-old will effectively move into the third car next year as Shane van Gisbergen joins Jamie Whincup in the Red Bull backed line-up.

The team has already begun the process of expansion, including today finalising the purchase of a third Racing Entitlements Contract.

Despite previous troubled experiences in three-car line-ups at 00 Motorsport and Ford Performance Racing, Lowndes is confident that Triple Eight’s expansion will be relatively smooth.

“I’ve been with teams that have run multiple cars, more than two, and it’s been a disaster,” Lowndes told Speedcafe.com

“I think you can potentially get to a position where you are running around like headless chooks and not all communicating together harmoniously.

“Obviously changing from Ford to Holden in 2010 was massive but this is our next biggest challenge and I was a little bit apprehensive to start with.

“But knowing how Roland (team owner Dane) operates, if a team could do it and do it successfully I have 100 percent confidence that this team can do it.

“Roland is quite smart in the way that he’s been rolling it out in the last couple of months.

“He’s already started looking at people and putting people in positions so that they get used to their roles coming into 2016.”

Lowndes, who has been domiciled at Triple Eight since 2005, says the changes to date have been seamless.

“It hasn’t interrupted us and people are embracing their new roles,” Lowndes said.

“It’s been a gradual growth and not something where you inject 15 or 20 new people.

“And like most things he does, he has been very smart at just introducing that over time.”

The team shake-up is expected to see Lowndes’ entry share a pit bay with Tekno Autosports next year, finally moving the veteran away from six-time champion Whincup.

“There’s obviously been a conversation of where things lay,” he said, having been forced to double-stack behind the six-time champion on multiple occasions in recent seasons.

“If I become the third car or the car that doesn’t have to share a boom it could be a good thing.

“Being that second car, lining-up waiting there and seeing the race unfold is very frustrating.”

Lowndes is meanwhile hopeful of maintaining his relationship with engineer Grant McPherson, who has already reaped success in his first year at Triple Eight since defecting from Prodrive.

“I’d like to stay with Shippy (McPherson),” he added.

“A driver engineer relationship is really important and I think that Shippy and I have bonded really well, really quickly.”