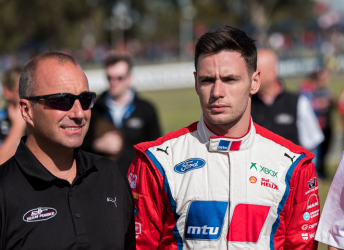 Marcos Ambrose’s return to the wheel in practice at Hidden Valley is an important step in DJR Team Penske’s quest to be a contender at Bathurst, says Scott Pye.

Ambrose is set to share the #17 Ford during the Friday sessions in Darwin, which will mark the 38-year-old’s first serious track time since March.

While Pye continues as the squad’s primary driver, the practice laps signal the start of Ambrose’s preparation for the Pirtek Enduro Cup, which will kick-off at Sandown in September.

“It’s been something that I’ve been asking; when is he going to get in and do some running again?” Pye told Speedcafe.com.

“It’s important for him. He stepped out because he believes that the category has changed a lot and he wants me to help him set up the car.

“But we need Marcos to be doing miles because come Bathurst time we want to be a really strong combination.

“Getting Marcos in for the practice session is us starting to get the pieces in place so that we can do the best job possible (in the Enduro Cup).”

After a rough start to the year that included the post-Albert Park driver change, an improved showing last time out at Winton has Pye bullish on the team’s potential.

The 25-year-old has no doubts that Ambrose will be up to the task in the enduros if the car is competitive.

“At Winton, I didn’t all of a sudden learn how to drive, we just got the car in the window,” he said, having recorded the squad’s first top 10 finish of the year in the Sunday race.

“It’s the same for Marcos. He hasn’t forgotten how to drive. We got the car right on Sunday at Clipsal for him and he was in the 10 (in qualifying). When the car wasn’t right he was P25.

“We need to make sure we can keep the car in the window now and keep working on it.

Pye is also looking forward to Ambrose’s assessment of the team’s progress with the car.

Recent months have seen the team redouble efforts to align its technical package with that of fellow Ford team Prodrive.

Winton’s result, however, came after the Queensland-based crew went its own way with set-up, rather than attempting to copy that provided by Prodrive under the customer agreement.

“It’s going to be good for me to get his input on things that we’ve changed with the car and how he feels with it,” added Pye.

“Hopefully he feels more confident once he’s driven it and that he agrees with what I’ve done with the car to get it back to how I like it.

“There’s still a lot of things that we’re changing to get back to where we had the car last year but I’m just looking forward to seeing what his opinion is.”