Australian Matt Mingay with his demo truck at today’s launch

The 600bhp American trucks featured at the Clipsal 500 Adelaide in March, where they stole the show with their spectacular jumps and wayward handling.

Confirmation of the Gold Coast deal came at an event launch today in Surfers Paradise.

The event will mark a return to the Gold Coast for Gordon, who raced Indy Cars on the famed street course on six occasions during the 1990s.

“I have so many amazing memories of the Gold Coast event,” said Gordon, who finished third in the 1993 Indy Car race behind legends Nigel Mansell and Emerson Fittipaldi.

“It is one of the very best street tracks in the world and the way the Gold Coast turns it on is incredible.

“We found in March of this year at the Clipsal 500 that the Australian motorsports fans are amazing and love to see the Stadium Trucks fly through the air and beat and bang only the way they can.

“To be able to bring our trucks to Queensland’s biggest party is going to be a huge highlight for our series.

“The Stadium Super Trucks on that track will be absolutely spectacular and we can’t wait to get back to Australia in October.”

The Carrera Cup Australia, V8 Utes and Formula 4 complete the event’s support program, while off-track entertainment will include a performance from rock band Cold Chisel.

V8 Supercars CEO James Warburton says that the Stadium Trucks are a major coup for the event, which is said to have provided $40 million of economic stimulus for the region last year.

“Last year we said that we would make this the biggest entertainment event on the Gold Coast and we delivered,” he said.

“Now we are raising the bar. Cold Chisel will be one of the biggest shows the event has had and the Stadium Trucks have to be seen to be believed.

“Their show in Adelaide had people on their feet. It is fantastic they have been able to come back to Australia and the Castrol Gold Coast 600 in October.” 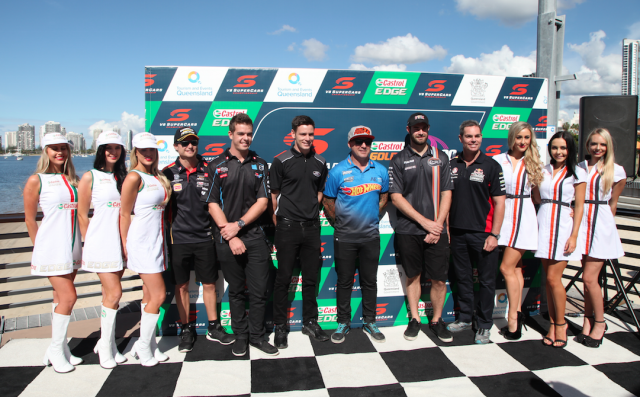 A host of V8 Supercars drivers joined Mingay at the launch