Ben Bowlby, designer of the GT-R LM NISMO, reveals the retro look for its #21 entry which will run in the Le Mans 24 Hour in two weeks

Memories of Nissan’s Group C Le Mans 24 Hour pole-winning car from 1990 will be revived with the Japanese maker running the retro livery for its return to outright competition next month.

The #21 GT-R LM NISMO, one of three radically designed front-wheel-drive and front engined LMP1 machines Nissan will debut at La Sarthe in two weeks, will carry the tribute hues.

It is a throwback to the R90CK which Briton Mark Blundell put on pole with the move to remember the fastest qualifier from 25 years ago partly triggered by feedback from fans on social media.

“Our racing heritage is hugely important to us,” Darren Cox, the NISMO global head of brand, marketing & sales said.

“Our 1998 car hangs on the wall at NISMO HQ in Yokohama as a reminder of our Le Mans podium and the blue liveries of the Group C and IMSA era of the 80’s and 90’s are a firm favourite with the fans.

“So much so that when we first started talking about the possibility of a third car livery specifically for our LMP1 debut at Le Mans this year, this was the one that fans across our social media channels called for.

“It’s a great way to celebrate our past achievements at such a key moment in our current motor racing history.”

Nissan’s #22 GT-R LM will be driven by Harry Tincknell, Michael Krumm and Alex Buncombe with the #23 line-up filled by Olivier Pla, Jann Mardenborough and Max Chilton.

The Japanese manufacturer will compete in the 2 mega joule energy class in what will be a belated World Endurance Championship debut for the boldly designed machines that will use a bi-turbo V6 powering the front and a KERS system which will feed the 9-inch rear wheels.

Nissan’s LMP1 fighters will roll out at La Sarthe on Sunday in two official test sessions for the entire grid. 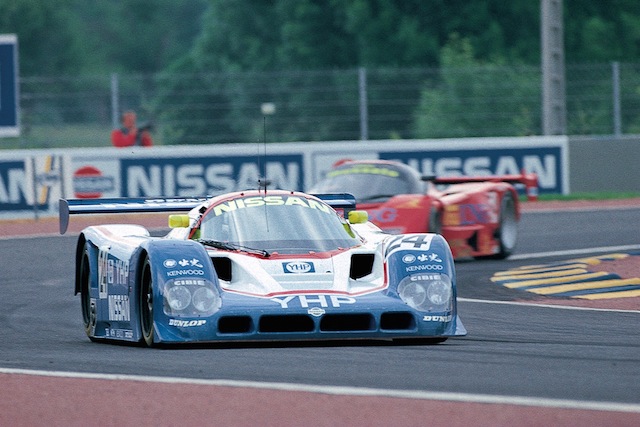