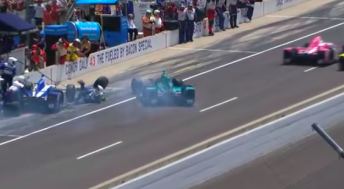 James Davison’s Dale Coyne Racing squad was handed a $10,000 fine as officials served a host of penalties following the 99th running of the Indianapolis 500.

The crew of the #19 Honda was penalised for an unsafe release when they gave Davison the all-clear to fire away from his pit box only to be sent into the path of team-mate Pippa Mann.

The contact saw Davison’s car shunted sideways, injuring two crew members of another Coyne entry who were servicing the car of Tristan Vautier.

Davison was forced to retire with mechanical issues soon after the incident on lap 116 of 200.

Series officials also moved to place Colombian Gabby Chaves on a six-race probation and receive a $10,000 fine ($5000 suspended like the Dale Coyne penalty) for making contact with personnel in another pit road incident.

In other penalties Team Penske and KV Racing were fined $500 each after respective drivers Juan Pablo Montoya and Stefano Coletti ran over air hoses during pitstops.

An Andretti Autosport crew member was fined $500 for breaching personal safety equipment rules with the deadman not wearing gloves.

There were pluses and minuses for Honda which received 40 bonus points for attaining the life cycle minimum of 2500 miles (4023km) on the cars of Takuma Sato, Marco Andretti, Ryan Hunter-Reay and Jack Hawksworth.

But Honda was then hit with an 80-point deduction for four of its engines failing to meet the minimum mileage before being changed.

It received a further 40-point penalty following the Indianapolis road course race when two of its powerplants were changed before reaching the minimum life cycle.

Chevrolet, which filled the top three spots in the Indy 500 through Montoya, Will Power and Charlie Kimball, lead the manufacturer points standings on 588 with Honda on 553.

Meanwhile Schmidt Peterson driver James Hinchcliffe has returned home following his terrible May 18 crash when the suspension failed on his Honda.

The Canadian was released from the IU Methodist Hospital after undergoing surgery for upper thigh and pelvic injuries.