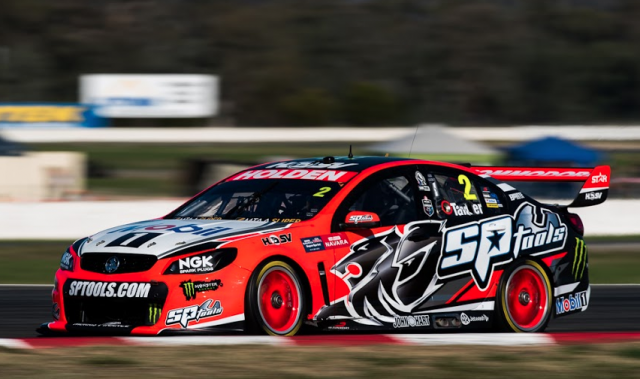 Garth Tander admits that the Holden Racing Team has “a lot of work to do” in order to consistently match Prodrive’s pace-setting Fords.

The HRT opened its season with a bang in Adelaide, with drivers James Courtney and Tander leaving the event first and third in the championship respectively.

While the team also scored podiums during subsequent events at Albert Park and Symmons Plains, recent meetings at Barbagallo and Winton have proven far more challenging.

Tander in particular has recorded just two top 10 finishes in the last six races while the Prodrive entries have powered ahead.

A fifth in the Sunday race saw him salvage his Winton weekend which began with a 16th and a retirement in the Saturday sprints, where he was collected by team-mate Courtney.

“The PRA cars seem to be the benchmark at the moment at all the circuits, given we have been to very different types of circuits over the last few rounds,” Tander told Speedcafe.com.

“They are the guys to beat and they have done a good job so it is up to the rest of us to catch up.

“It is not just us, the majority of the Commodores are struggling.

“Since Winton we are already understanding what could be creating that.

“We have a got a lot of work to do to fully understand it and rectify it but we have bit of time before Darwin.

“We think we know what is causing the issues but it is important we fix it properly not just put a band aid on it. It is not easy and there is work to be done.

“Winton aside our car speed has been fine, but we are not going to forget about Winton and say that is an anomaly.

“We need to make sure we understand it and make sure it doesn’t happen again at a circuit like that.”

Tander turned his attentions to the Australian GT Championship last weekend, where he recorded a second place finish in the Phillip Island 101 alongside Tony Quinn in the Darrell Lea backed McLaren 650S.