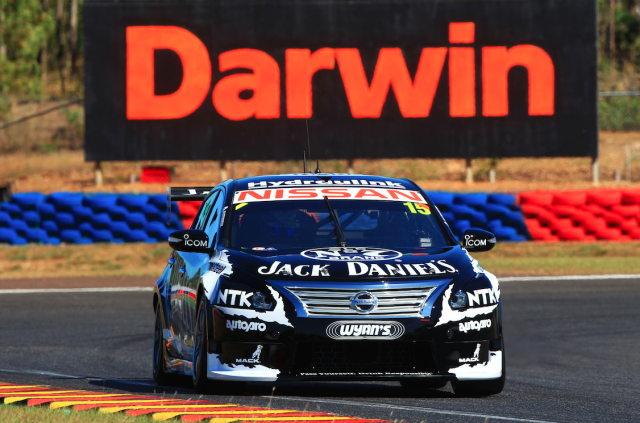 Rick Kelly at Hidden Valley in 2014

The combination of a recent track resurface and a tweak to the tyre allocation could trigger a surprise result at Hidden Valley, says Nissan’s Rick Kelly.

Darwin’s 2.87km circuit has been completely resealed since the championship last raced at the venue 12 month ago.

The major upgrade works leave teams particularly unsure of how the soft tyre will cope at an event that typically provides hot track conditions and high degradation.

The importance of soft tyre life has now been increased following confirmation that Saturday’s second race and its corresponding qualifying session will be run on the soft rubber.

Teams were also informed on Tuesday that a set of hard tyres will be taken out of the race weekend allocation as part of the change.

Once the new set of ‘practice tyres’ are handed back at the end of Friday, each car will have eight hards and eight softs for the remainder of the weekend.

Although Prodrive heads to Hidden Valley as the championship’s form team and the reigning winners at the circuit, Kelly says the surface change will make somewhat of a clean slate.

The Nissans were arguably the second fastest cars at Winton behind the dominant Fords, but have previously had a tougher time at Hidden Valley, which features a 1.1km front straight.

“Traditionally the soft control tyre goes away very quickly on the Darwin track because of the surface and the warm weather,” said Kelly.

“Teams that went well there last year and the last few years may not go well this year depending on how they can set the car up on the new surface.

“Obviously the layout, the corners are the same from a radius and camber point of view, but the surface really does throw a big unknown out there, and it throws a challenge to all of the teams.

“From that point of view it’s exciting, it’s a real opportunity for us to get on top of things quicker than anyone else, and we also want to maintain the momentum we’re carrying after the last couple of rounds from a results point of view.”

Prodrive engineer Adam De Borre admits the surface will be an extra variable, but says the team will head north confident in its base set-up after recent success.

“The new surface is certainly going to be a variable, it’s basically a brand new venue for all of us,” said De Borre.

“Everything we’ve learnt from the past goes out the window and we’re just going to attack it like we do any event.