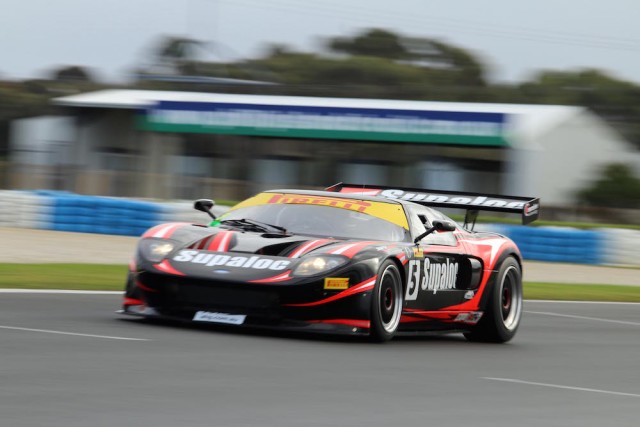 The V8 Supercar driver teamed up with Kevin Weeks behind the wheel of the Supaloc Racing Ford GT for his GT3 debut at the Victorian circuit.

However, contact in the early laps of the three hour endurance, with Weeks at the wheel, cut his Australian GT debut short, with the car retiring after only nine of the scheduled 101 laps.

Although disappointed not to complete the race, Moffat was impressed by the machinery and is hopeful he will get a another opportunity at the Australian GT season ending Highlands Park 101 in November.

Moffat’s only previous endurance racing experience came with a class podium at the 2014 Dubai 24 Hour as part of the Nissan Global Athlete driver exchange.

“It has been a great experience. I didn’t get that many laps but it was fantastic and it was a shame we didn’t get more laps in the race,” Moffat told Speedcafe.com.

“Having tasted the GT scene for the first time it is certainly something I would like to do more off in the future, but the priority and focus is with Nissan Motorsport in V8 Supercars.

“If there is the opportunity to do more of this style of racing I will certainly explore it.

“Highlands Park could be an option and that race doesn’t conflict with V8 Supercars so that is the big thing.

“We will just take it as it comes I would like to do more of this racing as it has been really fun.”

Meanwhile, Moffat is confident his Nissan crew has discovered the reasons why he was unable to match the pace of team-mates at the recent Winton Super Sprint.

The 30 year-old’s best finish at the event was a lowly 17th, while Rick Kelly and Michael Caruso both scored podium results.

“It was a difficult round for my car but the other three cars were strong,” added Moffat.

“We just missed it a bit on set up and we have found a few things from the weekend since.

“I think as a team we are heading in the right direction and we still have engine upgrades to come.”