Conor Daly to sub for Hinchcliffe in Detroit

Conor Daly to sub for Hinchcliffe in Detroit 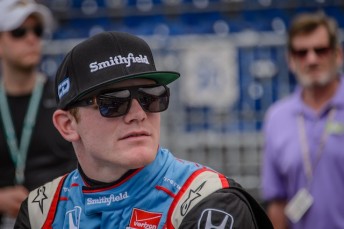 Conor Daly has been named as replacement for the injured James Hinchcliffe for the seventh round of the IndyCar Series in Detroit this weekend.

Daly received the call-up after being forced out of the Indy 500 when his Schmidt Peterson Motorsports machine started smoking and caught fire before the green flag when it developed a fuel leak.

The second generation racer will handle the #5 Arrow Electronics Honda in the Detroit double-header which features 70-lap races on Saturday and Sunday on the Belle Isle street course.

HInchcliffe continues to recover from injuries received to his upper thigh and pelvic region after being impaled by a piece of suspension in a horrifying practice shunt leading up to the Indy 500.

Daly, who drove for the Schmidt Peterson outfit in Indy Lights in 2001, will continue his cameo roles this season after standing in at the Long Beach Grand Prix in the #18 Dale Coyne Racing entry earlier in the year.

“I’m honored to have the opportunity to fill in for my close friend James this weekend,” Daly said.

“I can’t wait to continue working with the Schmidt Peterson guys and do the best job I can to keep James’ seat warm.”

Co-team owner Sam Schmidt said he was happy to give Daly another chance after he became the first retirement at the Indy 500.

“We’ve been impressed with what we’ve seen from him and after the bad luck at Indy, we’re pleased to give a young American rising star another opportunity to compete,” Schmidt said.

The #5 Honda which Daly will campaign in Detroit was driven by Australian Ryan Briscoe in the Indy 500 who managed a solid 12th place finish after becoming caught up in the first turn crash triggered by Takuma Sato and Sage Karam on the opening lap.

It remains unclear when Hinchcliffe will be given medical clearance to return to the series.