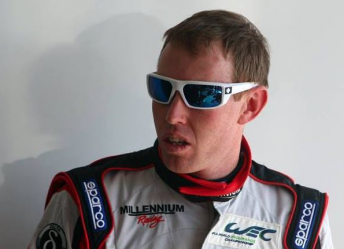 Experienced sportscar racer John Martin is closing on a deal to contest the remaining rounds of the Porsche Carrera Cup Australia season.

The 30-year-old is contemplating a permanent move back from the United Kingdom to Australia with a stint in Carrera Cup part of a plan to put himself in the frame for future V8 Supercars enduro drives.

Martin, who has spent the majority of his career racing in Europe and America, is on the verge of completing a deal with McElrea Racing to join the Carrera Cup grid at Townsville on July 10-12.

Having sat on the sidelines for much of 2014 after a deal to compete in the FIA World Endurance Championship with the Delta-ADR-run Millennium Racing LMP2 team fell through, Martin is keen to reignite his career in Australia.

A part campaign in Carrera Cup appears to be his most likely option, although he is also assessing the possibility of joining the Dunlop Series later this year in a bid to gather vital V8 Supercar experience.

Martin’s only run in a V8 Supercar came in 2005 when he completed a handful of laps in a Tasman Motorsport Holden Commodore at Winton.

Despite a diverse career, Martin has never contested a race at Mount Panorama which has further prompted a push to join the Carrera Cup or Dunlop Series, which visit the mountain circuit annually.

“We are pretty far along with talks (with McElrea) and we are getting really close,” Martin, who attended last weekend’s Carrera Cup Pro-Am at Phillip Island, told Speedcafe.com.

“It looks really promising and at the moment I would say we are 90 percent there.

“I want to do some Carrera Cup races as they go to some circuits I haven’t been to like Bathurst.

“It hurts me in terms of other categories because I haven’t done any laps there, so hopefully trying to rectify that this year.

“The main aim of racing in Carrera Cup is to do something in V8 Supercars in the near future so that’s why having not done any laps at Bathurst hurts me.

“There are few reasons why I have looked at Carrera Cup more than DVS (Dunlop Series).

“There is still an option in DVS but Carrera Cup being Porsche has worldwide exposure too and there are things you can do in Europe.”

Martin says he has sought advice from drivers and teams in V8 Supercars about how to break into the series.

While his immediate focus is on securing a race drive in Australia, he has not closed the door on his career in Europe and America.