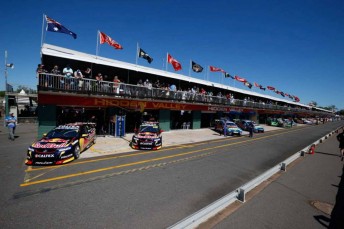 Extra soft tyres will be allocated at Hidden Valley

V8 Supercars has confirmed a move to add a set of soft tyres into its Saturday Super Sprint format for the upcoming Skycity Triple Crown.

The category has announced that each car will run the extra softs in the second Saturday race and its corresponding qualifying session.

The change comes after a succession of mundane 60km Super Sprints on the harder rubber.

“On Saturday teams must qualify and race on the same compound,” read a V8 Supercars statement.

“The Sunday race remains unchanged although teams can carry through hard tyres from Saturday. They are not permitted to use the Saturday soft tyre on Sunday.”

Although the extra soft tyres are currently only confirmed for Darwin, Speedcafe.com understands that more of the soft compound rubber will also be added to other Super Sprint events later in the year.

The Darwin allocation now sits at 12 hards and eight softs, with a set of the hards to be given back after Friday practice.