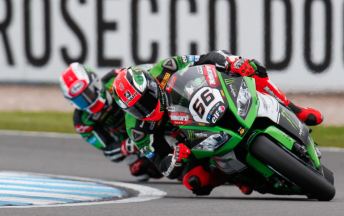 The 2013 world champion managed to see off his Kawasaki team-mate Jonathan Rea to score a brace of wins to move into the championship hunt.

Rea headed into the meeting having won eight of the 10 races so far this season.

The opening race provided a gripping contest between Sykes and Rea, who emerged at the head of the pack having seen off fellow Brit Leon Haslam.

Having dispatched of Haslam, the pair proceeded to produce a series of passes on each other for the lead, before Sykes managed to break away in the closing stages.

Championship leader Rea appeared to back off in the final laps as he crossed the line 3.7s adrift of victory Sykes at the chequered flag.

Chaz Davies completed an all British podium on home soil in third for Aruba.it Racing Ducati, while Haslam had to settle for fourth.

Sykes dominated the second heat from start to finish to claim his sixth world superbike victory at the Leicestershire circuit to equal the record of four-time world champion Carl Fogarty.

The Race 1 winner enjoyed a relatively trouble free ride to the chequered flag.

Rival Rea was lucky not to fall on the second lap which saw him lose ground to his team-mate.

The Northern Irishman managed to recover to second at the flag 9.7s adrift of Sykes with Davies in third once again.

Haslam emerged in fourth ahead of Ducati’s Davide Giugliano and Suzuki’s Alex Lowes.

Rea continues to lead the championship standings with a 101 point lead over Haslam, with Sykes a point further back in third.