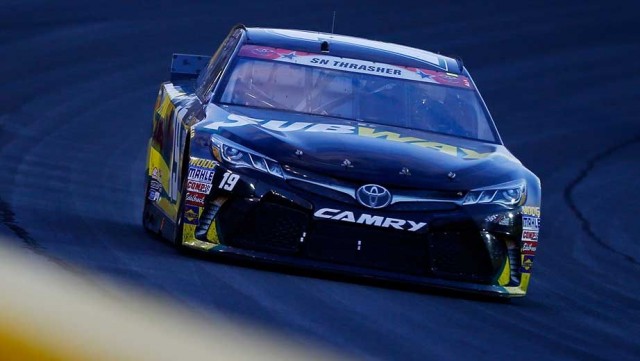 Carl Edwards scored his first victory for Joe Gibbs Racing with a calculated run in the Coca-Cola 600 at Charlotte.

The Toyota driver made the best of the fuel strategy to conserve his way to the chequered flag ahead of former Roush Fenway Ford team-mate Greg Biffle.

“JGR is back,” beamed Edwards in victory lane.

“These Toyotas are great. I was the slowest of the group tonight and I just had the best guys on the pit box.

“Darian (Grubb, crew chief) did a great job. Ever since Tony (Stewart) and I battled for that championship I wanted to work with him and now I can.

“He takes a mediocre day and puts us in a good position.”

Matt Kenseth added to the joy for JGR by recovering from a loose wheel to trail Dale Earnhardt Jr home in fourth.

The front-runners had diverged into two distinct strategies when the final yellow was called with 62 of the 400 laps remaining.

While Edwards led seven cars who elected to pit and then conserve to the end, the bulk of the field stayed out, running faster but forced to make a final stop.

Martin Truex Jr was the most high profile victim of the latter strategy, leading a race high 131 laps only to finish fifth.

“I don’t know what to do about fuel mileage races,” he said. “I’ve never come out on the right end of them.”

Brothers Kurt and Kyle Busch, who returned from an injury sustained in Daytona, were also long-time front-runners before coming home 10th and 11th respectively.

Jimmie Johnson was a notable absentee from the late race fight after crashing out of the top five on lap 273.