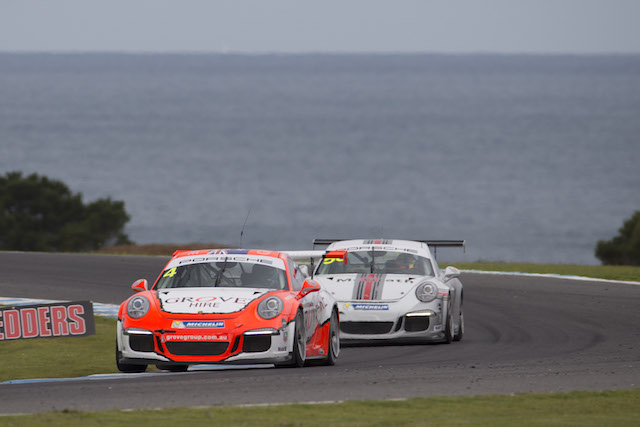 Long time rivals Percat and McLaughlin were involved in a titanic scrap for the race victory in Saturday’s first segment of Carrera Cup’s showpiece event.

The pair produced a breathtaking dice for the victory which was eventually completed by Percat’s co-driver Shane Smollen, with defending winners McLaughlin and Stephen Grove finishing a close second.

The on track battle is poised to continue with Percat and Smollen set to start Sunday’s 36 lap decider from pole position with McLaughlin and Grove alongside.

Close friends away front the circuit, McLaughlin, who described the battle as one of his most enjoyable moments in motorsport, says friendship will be put to one side as he and Grove bid to retain their crown.

Grove and Smollen will start Sunday’s showdown before handing their entries over to McLaughlin and Percat.

“It doesn’t matter if I’m racing my best mate or whatever. I get on with Nick really well and that has come from our DVS (Dunlop Series) battles. I have a lot of respect for him.

“We are serious about it every time we go out on track but it is fun at the same time. Me and Nick were just waving at each other during the race and putting the thumbs up.

“The battle is something I will remember for a long time as it isn’t something you get to do very often.

“I’ve just got to do the same again in Race 2 and drive as a hard as we can.

“At the end of the day we have to think of Stephen’s championship as he really wants this Challenge title.”

While V8 Supercars remain the pair’s priority, Percat admits there is pride at stake as the two young guns go head-to-head again.

“We are having our own little championship here,” Percat told Speedcafe.com.

“We are all really good friends away from the track but there is a lot of pride at stake.

“It was a credit to Scott for being able to race like that.

“I think we are in a pretty good spot heading into the second race.”

The deciding leg of the Porsche Carrera Cup Australia enduro is due to begin at 10:35 local time

Stay tuned to Speedcafe.com to watch the race live via live stream.