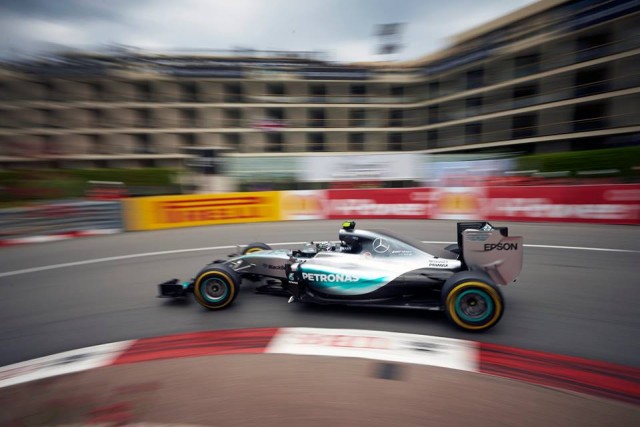 The Brit had dominated the race from pole position, leading every lap until a crash for Max Verstappen triggered the Safety Car with 14 laps to run.

Holding a 20 second lead, Hamilton was called to the pits for a fresh set of tyres, only to rejoin behind Rosberg and the Ferrari of Sebastian Vettel.

Rosberg drove away after the restart to win by 4.4s, with Vettel holding off the advances of Hamilton to the flag.

The two Red Bulls swapped places on the final lap, with Ricciardo instructed to repay Kvyat for letting him through several laps earlier.

Ricciardo had earlier lost fourth to Kvyat at the very first corner of the grand prix, before dropping another position to Raikkonen in the mid-race pitstop cycle.

The Finn was left frustrated by a late-race pass from the Australian, who nudged the Ferrari wide at the Mirabeau hairpin as he charged on fresher tyres.

Sergio Perez scored a solid seventh for Force India, which had seen its other car of Nico Hulkenberg shoved into the barriers at Mirabeau on the opening lap.

The incident was triggered by contact from Fernando Alonso, who served a five-second time penalty on his pitstop as a result.

The Spaniard had appeared set to score his first points of the season in ninth place before a gearbox problem halted his run just past half distance.

There were no such issues for team-mate Jenson Button, however, who managed to put McLaren-Honda on the scoreboard with eighth.

Sainz’s team-mate Verstappen was able to walk away from heavy head-on contact with the Sainte Devote barriers after misjudging a late passing move for 10th on Romain Grosjean.

The front-left of the Toro Rosso clipped the right-rear of the Lotus, breaking Verstappen’s suspension and spearing the teenager into the wall.