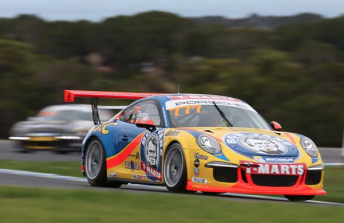 Thomas’ co-driver Nick Foster had put the #777 into a strong position holding second spot for the majority of the 36 lap enduro behind runaway leader Tim Slade, before inheriting the lead after the compulsory pit stops.

Although faced with a clear track ahead, Thomas had to keep an eye on his mirrors for a hard charging Percat, who took over from co-driver Shane Smollen from ninth position. 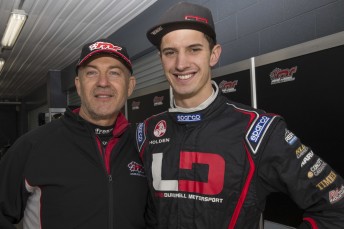 Percat scythed his way through the field to the point where he was all over the rear wing of Australian Manufacturers Championship racer Thomas for the final three laps.

The Lucas Dumbrell V8 Supercars driver tried to find a way past on the final lap but in the end Thomas hung on to take the victory.

“It’s been a rough start to the year and this round always throws up some interesting questions marks,” said Foster.

“We got Dylan on board pretty late. He’d only done less than a day in the car and he struggled a little to get his head around it at the test.

“It’s a big step up from an Evo to a Carrera Cup car, so he went away, did his homework and was on fire. Holding off Percat was pretty awesome.”

Percat guided the #56 to second despite receiving a five second penalty added to his race time for a jump start.

Following on from their victory in Saturday’s opening race Percat and Smollen have won the Pro-Am crown.

“I will be here next year we have won two of the four races together now”, said Percat.

“It is great format. The Sunday race was different, it was more strategic I knew we had the penalty and the cars I had to gap to win the weekend and that is what I did.”

Richard Muscat and Sam Walter secured the final place on the podium in third.

Pro-Am title contenders Scott McLaughlin and Stephen Grove recovered from a drama in the early laps to finish sixth.

Grove spun the #4 entry unaided, while occupying second spot, dropping him to the rear of the field dashing his hopes of retaining their Pro-Am crown.