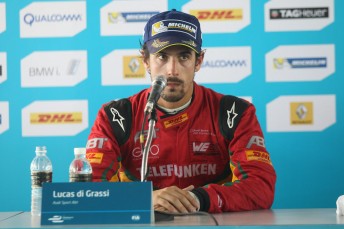 Jerome D’Ambrosio has inherited victory after race winner Lucas di Grassi was excluded from the FIA Formula E round in Berlin.

ABT driver di Grassi had dominated the race having moved into the lead on the opening, but officials stripped him of the lights-to-flag win after his car failed a post race scrutineering check.

Race stewards discovered di Grassi’s car had sported modifications to its front wing which have been deemed to have breached Article 3.1 of 2014/2015 of the FIA Formula E Technical Regulations.

The ABT squad, who decided against appealing the decision, argued the changes had been made following repairs and offered no advantage.

As result of the exclusion, D’Ambrosio, who enjoyed a strong race from sixth on the grid, has been awarded the win for Dragon Racing.

Former Toro Rosso driver Sebastien Buemi has been promoted to second after fending off the sister Dragon Racing entry of Loic Duval, who completes the altered podium.

China Racing’s Nelson Piquet Jr has opened up a two point lead over Buemi at the top of the standings with his fourth place finish on the Berlin streets.

Nick Heidfeld was overtaken by Duval in Piquet in the closing stages of the race, which saw him miss out on a podium as he crossed the line in fifth.

Stephane Sarrazin managed to hang onto sixth ahead of Andretti Autosports Jean-Eric Vergne.

Poleman Jarno Trulli finished two laps down despite holding onto second spot early on in the race.

The FIA Formula E Championship heads to Moscow for the penultimate round of the season on June 6.