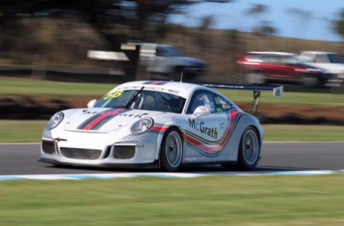 The V8 Supercar duo of Percat and McLaughlin were involved in a titanic battle for the lead in the first stint of the race, which saw the pair swap positions on several occasions.

Garry Rogers Motorsport driver McLaughlin produced a highly impressive run from fourth on the grid to put himself in a fight for the lead with Percat.

Percat and McLaughlin pitted with just seconds to spare on the pit window, but the race was robbed of a fascinating battle to the finish, when McLaughlin’s co-driver Grove emerged from the pits stuck on the pit limiter.

Grove quickly got up to speed but lost more than six seconds to Percat’s co-driver Smollen, who then controlled the remaining laps to take the chequered flag by 2.8 seconds.

The #14 OPS Gateway entry of Cameron McConville and John Goodacre claimed the final place on the podium in third.

A strong drive from 15th on the grid from championship leader Steven Richards saw the #1 Laser Plumbing entry finish seventh in the hands of Dean Grant.

VIDEO: Percat and Smollen speak after winning the opening race