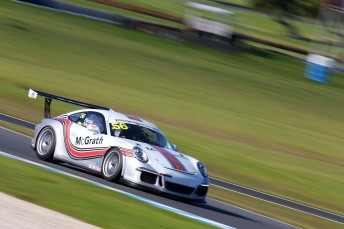 “I was P3 in my session but Shane did an awesome job to secure P2, which set us up for this final qualifying session,” Percat told Speedcafe.com.

“I only needed to put in a decent lap and I managed to do that.

“We just need to make sure that we have a clean first race which we didn’t get last year. If we can get a top 3 that will set us up well for Sunday.”

Percat and Smollen, who posted a combined 3:02.292s effort, will share the font row with #777 Bob Jane T Marts entry of Nick Foster and Dylan Thomas.

Cameron McConville and John Goodacre will start from thrid on the grid alongside Nick McBride and Neale Muston.

Garry Rogers Motorsport’s Scott McLaughlin and his co-driver Stephen Grove were fourth quickest ahead of James Bergmuller and Alex Davison.

Meanwhile, championship leader Steven Richards will start from a lowly 15th on the grid alongside his enduro partner Dean Grant.

The first of two 36 lap Porsche Carrera Cup races is set to begin at 12:45 local time.