Vautier in, Huertas out in late Indy 500 switch

Vautier in, Huertas out in late Indy 500 switch 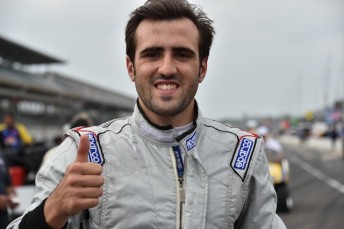 Former Indy Lights champion Tristan Vautier has been given an 11th hour call-up to the Indianapolis 500.

In what is a strange twist, Vautier will replace Carlos Huertas in the #18 Dale Coyne Racing Honda.

Vautier was charged with qualifying that team’s #19 car last Sunday as Australian James Davison was on Pirelli World Challenge duties in Canada.

Vautier now finds himself on the back row of the grid alongside Davison and Ryan Briscoe, the replacement for the injured James Hinchcliffe.

The 25-year-old sees himself having the rare distinction of qualifying one car and starting in another.

It has not been confirmed why Huertas, a winner of the now defunct Houston street race last year, has stepped down hours before final practice for the 200-lap race on Sunday.

The Houston victory stands as the only IndyCar win for Huertas who led home a trifecta for Colombian drivers in the race with Juan Montoya second and Carlos Munoz third.

Bryan Clauson, the slowest of the qualifiers in the #88 Chevrolet, has now crept a total of three places up the grid.