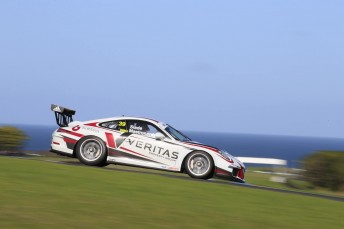 Slade’s efforts backed-up a solid performance by Tag Heuer Carrera Cup regular Adrian Mastronardo who was sixth overall in the semi-pro only practice earlier in the day.

Percat is once again sharing the driving duties this year with Shane Smollen while McLaughlin is back to defend his overall victory from last year with Stephen Grove.

It was a far cry from the corresponding event last year when Mastronardo crashed in slippery conditions on the Friday and sidelined the duo for the weekend.

Slade’s time came after a puncture midway through the session when he ran over debris.

Overall both the sessions for the semi-pro racers and the professionals ran without any major incidents.

Fastest in the semi-pro session was Dylon Thomas who is sharing with Nick Foster, with Geoff Emery setting the second fastest time in the Shae Davies’ entry. Third quickest was John Karytinos who is driving alongside Michael Almond.

Tomorrow qualifying is split into both professionals and semi-pro sessions; with the combined times making up the grid for the first 36 lap race.