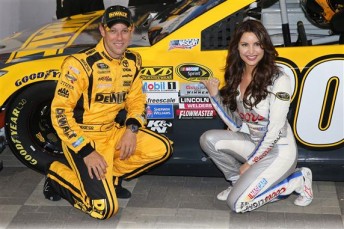 Kenseth scored his second pole of the season

Matt Kenseth will start off the point in NASCAR’s longest race of the season, the Coca-Cola 600 at Charlotte Motor Speedway.

In what is his second pole of the season, the Joe Gibbs Racing Toyota driver set a qualifying mark of 312.618 km/h (194.252 mph) or 27.799 seconds around the 1.5 mile speedway. So impressive was his performance that the next best was Joey Logano a sizeable 0.204 seconds further back.

“I think starting up front is important at this track,” said Kenseth.

“It typically goes through a lot of changes here, especially if the sun is out for the beginning of the race. You want to have good track position, good pit selection—all those things—so if you get a little bit off and you’re chasing the setup, or the track changes, you have a little bit of a buffer being toward the front, hopefully.

“All the Joe Gibbs Racing Toyotas had some speed tonight, and that was encouraging.”

All four Hendrick Motorsports Chevrolet entries failed to advance to the final round of knockout qualifying. However Kasey Kahne did cut a tyre and will start from 33rd.

The race will be held Sunday night Charlotte time.