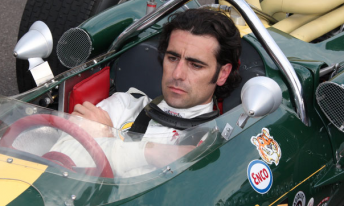 Dario Franchitti will relive “one of the highlights of my life” when he returns to the wheel of an iconic Jim Clark Lotus at the Indianapolis 500 on Sunday.

Franchitti has been given the honour of demonstrating the car which Scottish compatriot Clark guided to victory in the 1965 Indy 500.

The exquisitely designed Lotus was the first rear-engine machine to win the time-honoured American open-wheel race at The Brickyard.

The now retired three-times Indy 500 champ Franchitti and Leonard Wood, part of the pit crew on the winning Clark Lotus, are part of celebrations for the 50th anniversary of the famous victory.

Speaking ahead of Sunday’s laps, Franchitti recounted the time in 2010 when, dressed in period coveralls, he turned about 20 laps in the Lotus 38 which resides at The Henry Ford Museum in Detroit.

“I remember coming out of turn 2, I gave it about half throttle, that’s all I ever gave it and it just took off,” Franchitti recalled of the experience when he drove the Lotus-Ford at Indianapolis five years ago.

“It was staggering just how quick it was and the noise just went up another level.

“The seat position actually felt quite natural but you can’t move your arms, you just have to drive with your wrists and that took a bit of getting used to.

“It was absolutely one of the highlights of my life, getting to drive that car.” The iconic Lotus 38 at Indianapolis this weekend. pic: Speedcafe.com

Franchitti revealed he had become consumed by Clark, killed five years before he was born during a Formula 2 race at Hockenheim in 1968, after mentor and advisor Sir Jackie Stewart began talking about him over dinner some years ago.

“The more I read about the man, the more I found out about him and the more fascinated I became with him,” said Franchitti.

“The way he did things, his personality.

“Jackie is always at the other end of the phone and long may that continue.

“But Jimmy died five years before I was born.

“The first time I heard Jim talk on film I was just stunned and that’s why I’m just fascinated with his personality as much as his ability as a driver.”

Franchitti said the Lotus 38, above any race car in the world, is the one he would dearly love to own.

“This is the one for me,” Franchitti told Speedcafe.com

Leonard Wood, 80, who along with brothers Glen, Delano and Ray Lee brought their lightning pit stops from NASCAR to Indy as part of Clark’s crew in 1965, also reflected on the success.

“It was one of the greatest experiences with the Wood brothers I’ve ever had … when you see all of Clark’s accomplishments,” Wood said.

“Dan Gurney had always said Clark was the best that ever was.

“Clark was just a very easy going person, somebody you got to know and wasn’t cocky or anything.

“I’m not boasting but I do know what a good engine sounds like.

“And that (Ford-powered Lotus 38) was one of the best sounding engines.

“It was a unique designed engine with the exhausts coming out on top rather than the bottom and the injectors on the bottom.

“If you look at it, the exhaust kind of helps a bit with downforce.

“It’s a great race car. A super design and looks so good on the racetrack when its running.”

Wood will be honoured with various commemorative activities across the Indy 500 weekend.