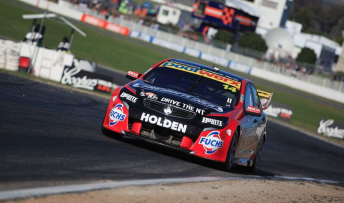 Fabian Coulthard will head to next month’s Skycity Triple Crown at Hidden Valley armed with a brand new V8 Supercar.

The fresh chassis will be the Kiwi’s first new car since Adelaide, 2013, where the entire field rolled out their first Car of the Future generation machines.

Coulthard wrote on social media that his current car, nicknamed Tallulah, is being “rested” after its podium in the final race at Winton.

“After 2.5 years of racing, 7 Pole positions, 8 Race Wins, 24 Podiums, 2 Lap records, (Bathurst being the highlight) today we pulled Tallulah out of the truck and resting her for now,” he wrote.

“She will sit there as the most successful Brad Jones Racing V8 Supercar. So a sad day but also exciting.”

“We have been working on chassis #5 for a while, there hasn’t been any rush to introduce it into the team,” explained team owner Brad Jones, who expects the car to be ready for a pre-Darwin shakedown.

“With the gaps in the calendar recently it has given us the opportunity to finish the car off.”

Coulthard will be the third Kiwi to have a new V8 Supercar this year, with Scott McLaughlin debuting a new Volvo at Barbagallo and Shane van Gisbergen also set to upgrade at Hidden Valley.