Audi celebrates victory at the Nurburgring 24 Hour with new R8

Audi has prevailed with its all-new R8 after a thrilling dice with BMW to win a thrilling Nurburgring 24 Hour race.

The Audi and BMW were engaged in an epic fight, trading the lead many times in the closing quarter of the twice-around-the-clock race.

There were a string of retirements including defending race winner Christian Mamerow who crashed out of the lead in the Phoenix Audi at Plfanzgarten less than halfway through the twice-around-the-clock marathon.

It proved to be a successful race for experienced Australian driver Mal Rose who was part of the SP8 class winning Aston Martin Test Centre squad.

The #48 Aston Martin, which featured Queenslander Liam Talbot, crashed out after just 95 laps. Toomas Heikkinen landed the third round of the FIA World Rallycross Championship at Mettet, Belgium for the Marklund Motorsport team.

Heikkinen lead from start to finish to beat SDRX driver Petter Solberg with the ex-World Rally Champion moving to a 22-point lead in the championship.

The Finn was awarded the coveted Monster Energy Super Charge Award after his rapid start off the line during the final, and also wins a Rebellion Timepieces Wraith Drive Rallycross watch from the Championship’s official timing partner.

Solberg was stung with a Double Joker penalty after jump starting his Citroen DS3 Supercar in semi-final one.

The disadvantage didn’t hinder the reigning Champion, however, as Solberg drove flat out to finish just half a second behind Sweden’s PG Andersson.

“I took a gamble in the semi-final but it didn’t work out. After that, I had to really push to make up for the time I was going to lose from taking two Jokers,” Solberg said.

“All I could think about was going as fast as I could.

“Then in the final, the plan was to aim for second but when my spotter told me I was only a second behind Topi, I tried to catch him but went into the Joker too fast.” 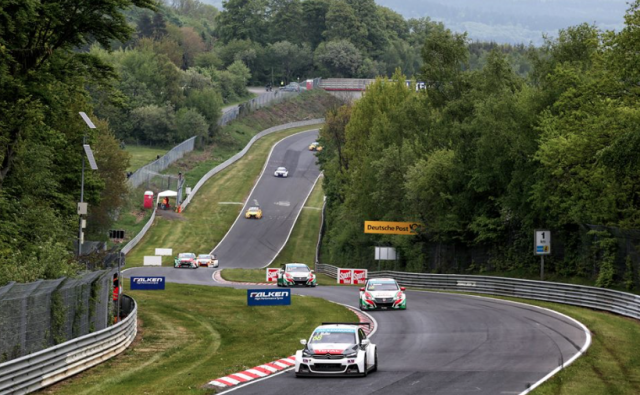 Yvan Muller leads the pack at the Nordschleife

Yvan Muller hung on to claim victory in the final World Touring Car Championship race at the infamous Nurburgring Nordschleife.

The Frenchman emerged in the lead at the end of the first of three laps at the 20.8km circuit, but was forced to keep an eye on his mirrors for a hard charging Citroen team-mate Jose Maria Lopez.

Once in clear air the reigning world champion stormed up to second position on the final lap finishing just 0.173s behind Muller at the flag.

Honda’s Tiago Monteiro secured the final spot on the podium with the Portuguese racer just 0.694s adrift of the race winner.

Lopez dominated the weekend’s opening encounter as he converted his pole position into a lights-to-flag victory.

Loeb followed his opposite number home in second while Citroen completed its domination of the race with Muller in third.

Hungary winner Norbert Michelisz was the best of the rest guiding his privateer Honda to the finish in fourth.

Lopez boasts a 50 point lead at the top of the championship standings from Loeb ahead of the fifth round of the season at Moscow on June 7. 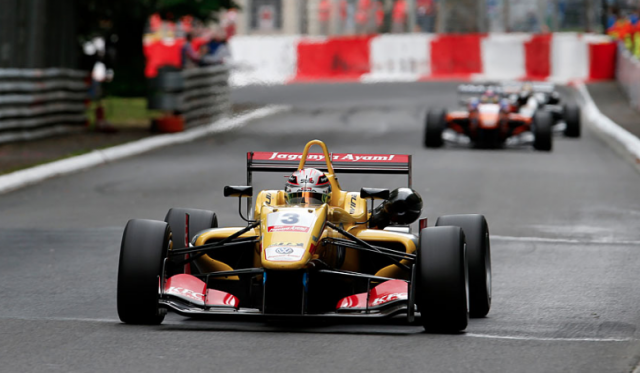 Antonio Giovinazzi extended his lead in the FIA European Formula 3 Championship with victory in the historic Pau Grand Prix.

The Italian Jagonya Ayam with Carlin driver chased Brit Jake Dennis in the early stages but his victory hopes looked to be fading as he dropped away from the Prema Powerteam racer.

However, a suspected suspension issue for Dennis in the final laps of the race handed the victory to Giovinazzi.

Dennis won the two earlier encounters on the tricky French street circuit with the Racing Steps Foundation backed driver leading home Giovinazzi and Leclerc in Race one despite coming under severe pressure.

He backed up the victory with another measured drive in Race 2, which saw the deployment of the Safety Car on three occasions.

Leclerc followed Dennis to the flag with Giovinazzi in third.

Following his Pau Grand Prix triumph, Giovinazzi leads the championship with a 15 point margin over Leclerc. The experienced American GT racer pipped Kevin Estre’s McLaren to the chequered flag in Race 1 by 0.3s with the Bentley  of Butch Leitzinger in third.

O’Connell, driving the ATS-VR GT3, repeated the feat in Race 2 as he fended off the Bentleys of Leitzinger and Chris Dyson. 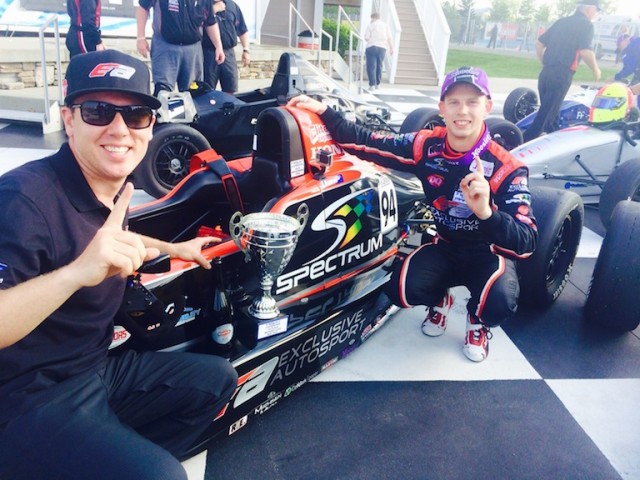 Australia’s Scott Andrews swept the day at Watkins Glen with two wins from the three heads in the F1600 Formula F Championship Series on the weekend.

“I am extremely happy with this win. I feel like we’re continuing to make positive steps forward with the car and myself,” Andrews said.

“As always I am very thankful to Exclusive Autosports, Automobility and Spectrum for making all of this possible.

“We have a solid points lead now so I am just going to keep on racing smart like I have been and keep moving forward. ”

The F1600 season continues at Virginia International Raceway from June 5-7 with rounds seven, eight and nine of 21.