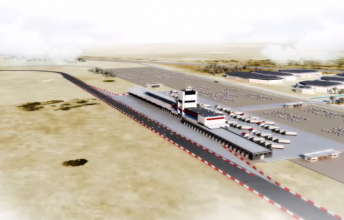 The Abbott government will allocate $7.5 million toward the large scale investment earmarked for Tailem Bend in South Australia.

With earthworks beginning at Tailem Bend earlier this year, the handout is part of the federal government’s push to inject regional Australia with vital infrastructure projects.

The former Mitsubishi proving ground located about 100km south-east of Adelaide, is one of several proposed venues which V8 Supercars has signed memorandums of understanding as future hosts of the category.

Under a grandiose plan headed by Peregrine Corporation’s Sam Shahin, the venue proposes an international standard circuit with attached infrastructure that includes accommodation, hotels and restaurants.

The circuit will feature a multi-configuration layout with lap lengths variable from 3.7km to as long as 7.2km.

Tailem Bend appears to be the front-runner to lead Australian motorsport’s next phase of circuit development which has not seen a new venue of national standard since the opening of Queensland Raceway in 1999.