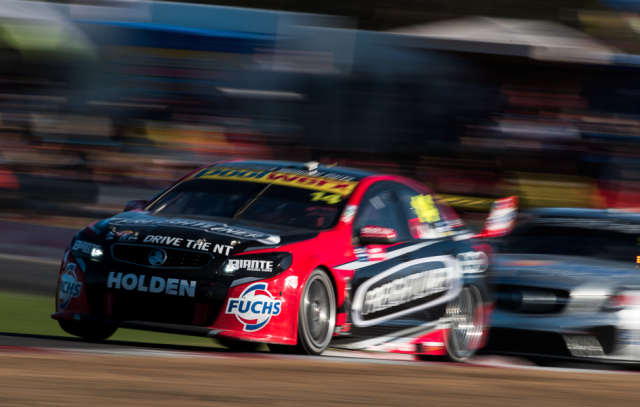 Fabian Coulthard has scored five podiums from the first 12 races

Fabian Coulthard says that Brad Jones Racing still has “plenty of improvement to come” after a strong start to the year.

The 32-year-old moved from fifth to third in the championship with a second place finish to Mark Winterbottom on Sunday at Winton.

Encouragingly for the team, Coulthard’s season tally of five podiums have been spread across three of the four circuits visited to date.

The strong start has Coulthard optimistic that BJR can avoid the lulls in form that have kept it from seriously contending for the title in recent seasons.

“I think the guys have definitely made some inroads with our cars over the off-season,” said Coulthard, whose team underwent an overhaul of its engineering structure over the summer.

“We got our first win on a street circuit in Adelaide and we’ve had a podium at every round apart from Tassie.

“Our car is pretty good on all different types of circuits now which is promising, but obviously we need to get those 60/60s (Saturday races) right and we’ll give ourselves a better shot.”

The latter race saw Coulthard elected to save tyres following an incident-hit qualifying session that left him starting at the back of the field.

“What wins championships is collecting points and when it’s not a good day you’ve got to collect what you can,” he continued of his championship situation.

“I think the way we’re going, we’ve got plenty of improvement to come, we’re always improving our car and making it better.

“I think from last season to this season has proved that. We’ve just got to keep going about our business.”

Coulthard had threatened to steal the Race 12 win from Winterbottom during the final stint, but didn’t quite have enough to overtake the Prodrive Ford.

“It’s good that we had pace on the hard and the soft tyre,” he said.

“I gave my best shot to Frosty and it was kind of a rubber band effect; I’d catch him, he’d pull away, I’d catch him.

“I did what I could and my best wasn’t good enough, but we should be pretty happy with the result.”