Mark Winterbottom says that his Prodrive team “won’t get carried away” with its title prospects after taking the championship lead during a dominant weekend at Winton.

The team has established itself as the benchmark performer over the opening phase of the season with its new and improved FG X Falcon.

The squad is on a run of nine wins from 13 races, including Albert Park, while six consecutive poles marks the longest streak for any team since Dick Johnson Racing in 1988.

Winterbottom has taken eight of the team’s nine wins but, after repeatedly falling short of the championship in recent years, the former Bathurst winner isn’t taking anything for granted.

“Who knows?” he said of whether the team can continue its form.

“Last year we had a good lead and fell away.

“Everyone is working hard and we’re trying.

“I thought this round might be tough but we’ve proved it to be a good one for us.

“You never write anyone off, but we’ll try and continue to move forward.

“Time will tell. We’re not in December yet so we won’t get carried away.”

Despite his caution, Winterbottom suggested the team is currently “at its best” following changes to its engineering department over the off-season.

“You sign deals with a team because you back that team and you think you can win with that team,” he continued.

“I’ve been around for quite a long time now and the place is probably at its best. I feel good, but you’re never home.

“Craig (Lowndes) had a bad weekend and he still salvaged a good result. There are so many good cars and drivers and teams.”

Race 12 saw Winterbottom capitalise on a mid-race mistake from team-mate Chaz Mostert, who spun into the Turn 4 wall while leading.

Winterbottom emerged a net second from the resulting Safety Car period, subsequently using his fresh soft tyres to overtake leader Lowndes before controlling the race to the flag.

“The car was probably not there 100 percent but when we put the softs on that’s when the race really started,” said Winterbottom.

“I was surprised how much pace Craig had with those 10 lap old tyres.

“He did an awesome job to bring it home. We tried that (running the same set of softs in the first and last stint) in Perth and couldn’t do it.

“It took a lot to get passed him and then we raced Fabs (Fabian Coulthard) from there. It’s an awesome result.” 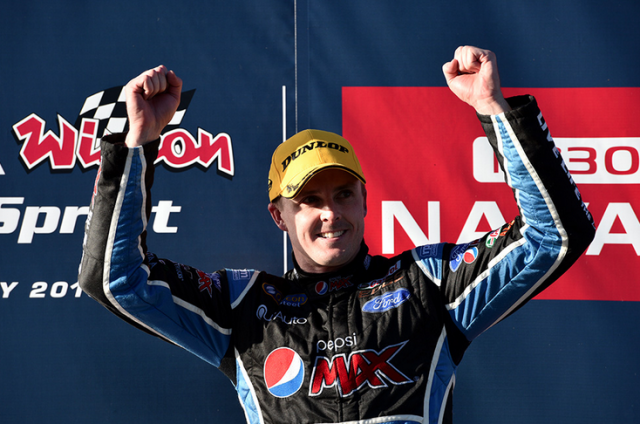 Winterbottom on the Race 12 podium