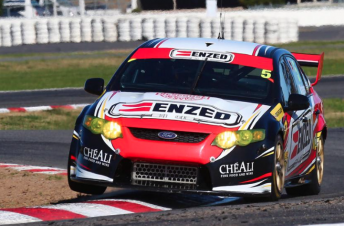 Cameron Waters extended his Dunlop Series winning streak to five consecutive victories with a measured lights-to-flag drive in the second heat at Winton.

The Prodrive Racing Australia driver was initially outgunned at the start by Andrew Jones although the championship leader managed to hold the lead at Turn 1.

Having converted his pole into the lead, Waters quickly began to move away from Jones’ Commodore, edging a gap lap by lap until the chequered flag.

Jones was unable to pose a real threat to Waters with the Brad Jones Racing driver forced to settle for second 1.4s adrift of the Prodrive Ford Falcon.

There was little action at the sharp end of the field as reigning champion Paul Dumbrell enjoyed a quiet drive to claim the final place on the podium in third.

The battle for sixth spot raged throughout the race culminating in Shae Davies hanging onto the position, despite coming under pressure from Todd Hazelwood and Eggleston Motorsport’s Ant Pedersen.

Paul Morris finished ninth having won a battle with Garry Jacobson in the closing stages.

Dixon collided with the Golding’s car which pitched the former Utes driver briefly into the air. The subsequent damage forced him into retirement along with Golding.