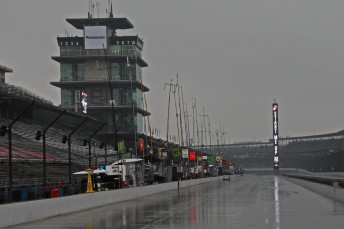 Persistent rain showers has forced IndyCar officials to postpone Saturday’s qualifying runs for the 99th running of the Indianapolis 500.

Qualifying was scrapped when heavy rain hit the 4km oval after Ryan Hunter-Reay and Carlos Huertas had completed their four lap qualifying runs.

Andretti Autosport’s Hunter-Reay had topped the timing screens with a 229.85mph (369.90 km/h) four lap average, with Huertas posting a 228.34mph (367.48km/h) effort, although both times have been subsequently deleted.

As a result, IndyCar organisers have issued a revised Sunday May 17 schedule which will begin with two 20 minute practice sessions.

Qualifying will begin at 10am local time with all 34 cars set to complete one four lap run.

This will be followed by the Fast Nine shootout to determine pole position for the time honoured 500 mile classic.

A further 45 minute session will take place to set the positions for the final row of the grid.

Team Penske’s Helio Castroneves topped the morning’s earlier practice session with the fastest lap of the week so far, having posted a 233.47mph (375.73km/h) lap.

Although unofficial, it is the fastest lap at the Indianapolis Motor Speedway since Eddie Cheever recorded the fastest race lap at 236.10mph (379.97km/h) in 1996.

“That 233 mph number was pretty cool, but it was with a little bit of help (from a tow),” said Castroneves.

“The Shell V-Power Nitro+ guys have really done an amazing job over the last couple of days since the flip.

“To lose a day and still be on top of the practice speeds today is a testament to how hard they worked.

“The weather, there is nothing we can do about the weather. We’ll just come back tomorrow and see what’s in store.”

JR Hildebrand was second fastest ahead of Friday pacesetter Simon Pagenaud and Will Power.