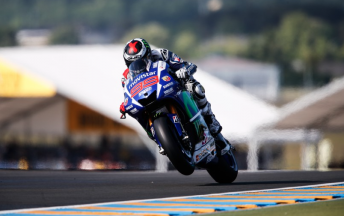 Jorge Lorenzo produced a masterful ride to secure his second victory of the season in the French Grand Prix at Le Mans.

The former double MotoGP world champion confirmed his championship credentials with a measured lights-to-flag ride as he successfully fended off a spirited challenge from Yamaha team-mate Valentino Rossi.

An excellent getaway saw Lorenzo launch into the lead on the run to the first corner where he would stay for the entire race.

However, it was far from an easy victory with Lorenzo coming under prolonged pressure from the factory Ducatis of Andrea Dovizioso and Andrea Iannone in the early stages.

Having dealt with the Ducatis, Lorenzo faced a challenge from a hard charging Rossi, who stormed up to second by the halfway mark.

Rossi’s charge failed to unnerve Lorenzo who went on to take the flag to claim back-to-back wins following his triumph at Jerez earlier this month.

Nine-time world champion Rossi settled for second while Dovizioso secured the final spot on the podium.

Polesitter Marc Marquez was hampered by a slow start which left him adrift of the front runners.

The reigning world champion was unable to match the pace at the front and found himself embroiled in a titanic scrap for fourth in the closing stages with Iannone and Tech 3 Yamaha’s Bradley Smith.

Pol Espargaro finished in seventh ahead of Yonny Hernandez, Suzuki’s Maverick Vinales and Danilo Petrucci, who completed the top 10.

It proved to be a difficult day for LCR Honda with Cal Crutchlow and Jack Miller crashing out of the grand prix.

Crutchlow dropped his Honda from seventh spot on lap eight, while Miller had been an enjoying an impressive run in 12th position before he fell at Turn 4 with 14 laps remaining.

Honda’s Dani Pedrosa recovered from a fall early on to finish in 16th position on his return to the premier class.

Rossi leads the world championship standings with a 15 point margin over Lorenzo heading into the Italian Grand Prix on May 31.